Over 1200 years, this road has preserved traces of historical events

"Rokujuri-goe Kaido," an ancient road connecting the Shonai plain and the inland area is said to have opened about 1200 years ago. This road was the only road between Shonai and the inland area. It was a precipitous mountain road from Tsuruoka city to Yamagata city passing over Matsune, Juo-toge, Oami, Sainokami-toge, Tamugimata and Oguki-toge, then going through Shizu, Hondoji and Sagae. It is said to have existed already in ancient times but it is not clear when this road was opend.

The oldest theory says that this road was opened as a governmental road connecting the Dewa kokufu government which was located in Fujishima town (now Tsuruoka city) and the county offices of the Mogami and Okitama areas. But there are many other theories as well.

In the Muromachi and Edo periods, which were a time of prosperity for mountain warship, it became a lively road with pilgrims not only from the local area, but also from the Tohoku and Kanto areas heading to Mt. Yudono as "Oyama mairi" (mountain pilgrimage) custom was booming. During the age of Provincial Wars, the Mogami clan and Shonai clan fought fierce battles with each other over their territories. The road was full of troops and battle flags in those days. On the other hand it was also a vital road for common people, they carried aeafood and candles from Shonai, and safflower, cotton, beans and leaf tobacco from the inland area on their backs.

From the Meiji year 30 (around the 1900s), this road was not used much as a new road was opened. But today this ancient road covered in moss is still rich with historic remains.

This continuation see a brochure or movie, please.

Enjoy the ancient road of Dewa course (for intermediates)

Complete course of Rokujurigoe kaido (for the experienced)

Mt. Yudono Worship and Sokushinbutsu.
The Man of Miracle who Exists Beyond Space and Time. 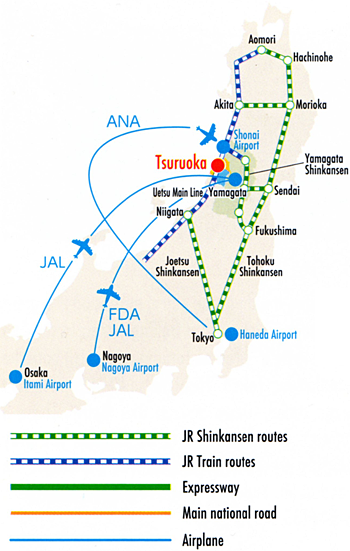